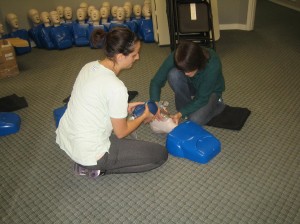 Pediatric Advanced Life Support (PALS) is an Advanced Life Support class for healthcare providers. ALS programs teach trainees how to give CPR to a victim in a controlled healthcare environment such as a hospital or clinic. The ALS curriculum uses the concept of Basic Life Support and medical interventions as a way to address cardiac arrest. Arrest can be caused by a number of reasons, the most common being a pre-existing cardiac program. PALS training is a two-day course, with 16 total class hours.

According to the WHO, the leading cause of death in the world is ischemic heart disease, closely followed by stroke. These cardiac problems are one of the biggest risk factors for getting a heart attack. CVDs are part of the ALS curriculum because of they are always in the top ten causes of death in almost all countries around the world. Trainees are taught to recognize that cardiac arrest has happened in a victim and act accordingly.

While CVDs are the primary cause of arrest in adults, cardiac arrest in children is primarily respiratory in nature. This is called asphyxial arrest. When children experience respiratory problems and eventual failure, the resulting lack of oxygen causes a cardiac arrest. This makes ventilatory support one of the prime interventions done during PALS.

We are located in six cities spread out over the country in five states. You can sign up for the one nearest you in person or over the provider websites. Our training providers can be found in the following locations.

Our locations all offer the same classes as each other, at the same rates. Schedules may very but all of the programs have the same quality and are taught by certified rescuers. We encourage trainees to enrol in person or over the telephone, especially if they have any questions regarding application or certification.